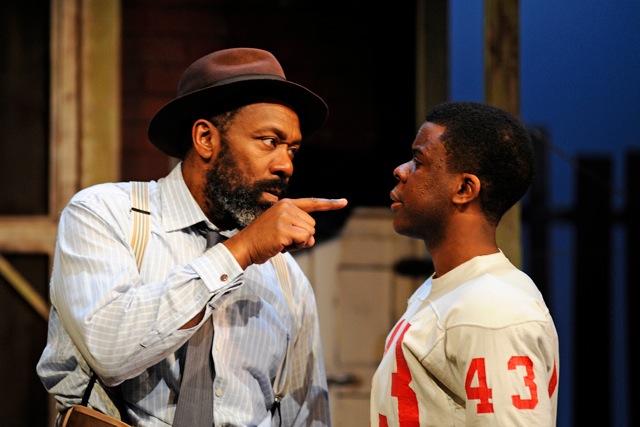 August Wilson’s play Fences is being performed to rave reviews in London’s West End.  It stars Lenny Henry, whose stage debut was a brilliant turn as Shakespeare’s Othello. Nowadays it is easy to separate Henry the comic from Henry the actor.  In a recent appearance on BBC radio 4 Lenny Henry responded to the question by stating that “comedy is my job, acting is my career”.

This leading role sees him playing Troy, a talented ex-baseball player turned garbage man.  He is a fifty-something husband and father trying to be the best he can be but weighed down by his past experiences.  The play is set in 1957 with Troy having lived most of his life in a segregated country. In 1949 Jackie Robinson became the first baseball player to cross the major-league colour line but by then Troy could have been seen as too old to play major league.

Troy is caught between the two very different generations of his father and his son.  He embodies the struggles, pain, losses and successes of his life. Henry’s stage presence means you can’t keep your eyes of him.  Troy is stubborn and very good at covering his emotional turbulence. There is an underlying weariness we get glimpses of as the play continues and we find out more of his past.  But he is also hardworking and decent and wants the comfortable life that society promises. He tries to break through discrimination at work in his desire to become the first black man to drive the garbage trucks.

Troy is the heart of the play.  His relationships with his American football obsessed son Cory, his garbage man buddy Jim and his devoted wife Rose, all serve to give an insight into the man. Cory is at the receiving end of much pent up hurt and anger. Another son, Lyons and Troy’s brother Gabriel, help to create this engaging community of people.

If I were to critique the play it would be about the limited and narrow role the female character had.  There was more action than introspection on her part until the very end when we find out a bit more about her internal workings.  Having said that, her big gesture isn’t sufficiently explained.  I could make some sense of her responses but my male companion was quite surprised at the twists at the end.

Director Paulette Randall has directed plays throughout the UK, as well as for the BBC and Channel 4. She was an Associate Director of the London 2012 Olympics opening ceremony.

August Wilson (1945-2005) was the son of a German man and African American woman.  He has written ten plays, one for each decade of the 20th century. From his early twenties he began writing plays that show the African American experience in all its fullness and humanity. He picked up a Best Play Tony Award and the Pulitzer Prize for Drama in 1987 when James Earl Jones played Troy on Broadway.  Lenny Henry had big boots to fill and they seem to fit him well.

Shirley Anstis is a counsellor, author and former magazine editor with a desire to live well and support others to do the same. She uses counselling, mindfulness and therapeutic writing to help her clients to work through their past, connect to their present and step into their future.This means connecting to our thoughts, feelings, imagination, body, mind and soul. The aim is to live happier and more fulfilled lives as we remember to be living beings, not just doing beings.
Loading Comments...