Camila Batmanghelidjh: Making a difference through her passion

Below is my interview with Camila as published in TODAY Magazine just over a year ago. I hope the charity, its clients and staff find a way through this difficult time.

In preparing to meet Camila Batmanghelidjh of Kids Company I came across so many people who knew of her colourfully draped image without knowing her name or her role. It was a pleasure to meet with her in her beautifully decorated and homely office in London. 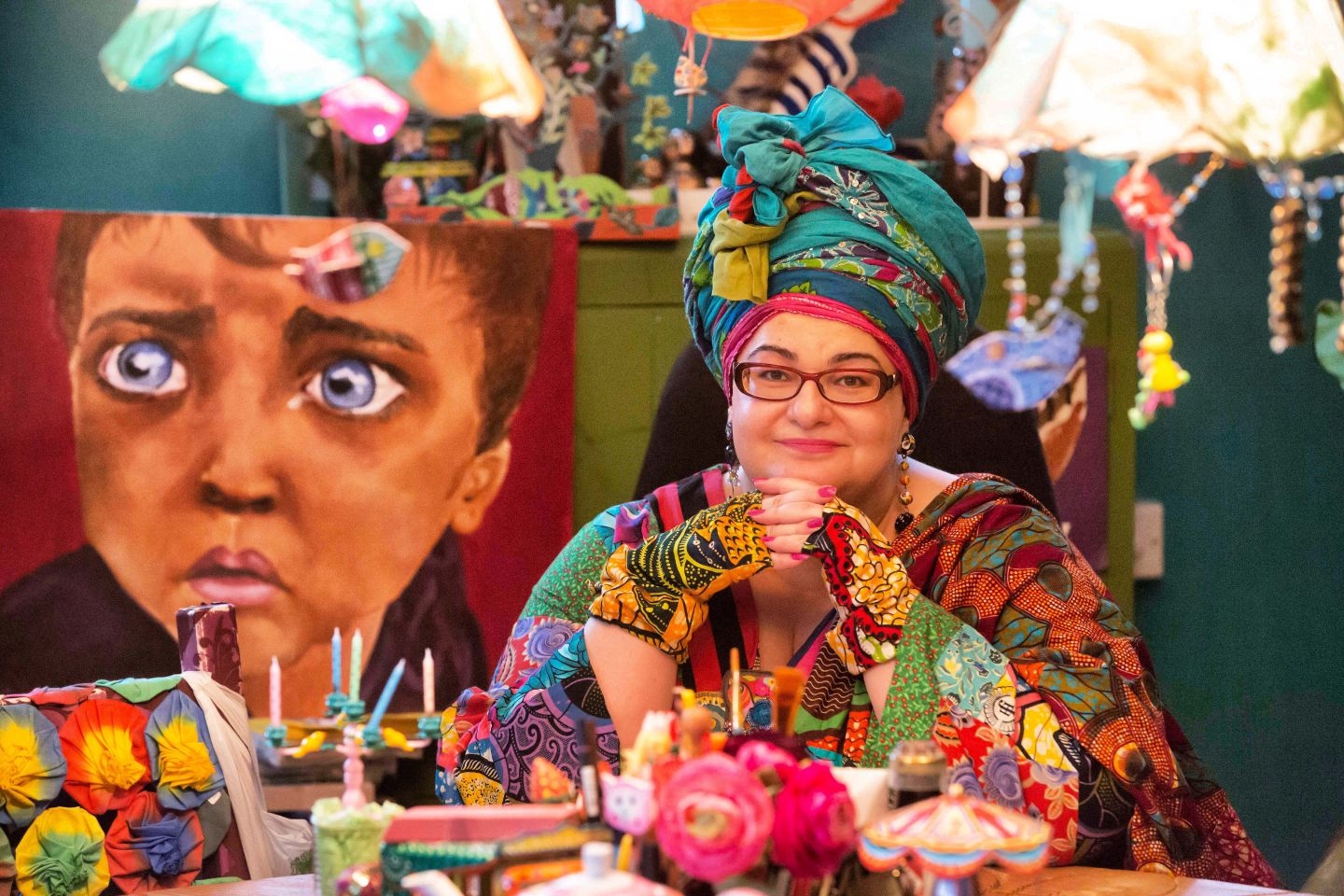 Camila Batmanghelidjh and her passion for Kids Company

She heads up an innovative and effective organisation in Kids Company. For 17 years now she has dedicated her life to improving the lives of suffering children. When I asked her what these kids had in common she spoke of their “dignity being taken away by the circumstance into which they are born so they may not feel that they are worthy of the love and respect of others”. Her organisation works with these kids who have been failed and turns their lives around. The staff offer emotional, practical and educational support. So who is Camila and what does her organisation Kids Company do?

Camila was born into a very wealthy Iranian family and lived her early life very quietly. Her father was involved in politics and when the political climate in Iran changed she became a refugee in the UK. What I hadn’t realised before the interview was that her status is still classed as a refugee. In the current political climate it is noteworthy that this refugee has raised million of pounds for charity and has improved the lives of thousands of children through her various organisations. She has set up two children’s charities: A Place 2B and Kids Company. She and her team have raised in the region of £150 million! Currently she leads a team of 600 workers “sharing their beautiful souls with 36000 children, parents and young adults” across 10 centres and in over 40 schools in London and Bristol.

Among several awards Camila won the UK’s Woman of the Year award in 2006. In 2013 she was appointed as an honorary Commander of the Order of the British Empire (CBE) for her work on behalf of underprivileged children in Britain. She also has an honorary doctorate from the Open University. An incredible achievement.

The other relevant fact about Camila is that she has dyslexia. An easy label that belies the character and effort it takes to persevere. Like many sufferers she was led to believe that she was not clever but with her early confidence in herself, she knew that this was not the case. Eventually dyslexia was the explanation. In truth this is why she remains a refugee because only recently have people been allowed administrative assistance to complete the nationality tests. Now it is just a matter of finding space in her packed diary to learn and pass the test. Such labels don’t bother Camila as she loves living in England and doing a job she is passionate about.

From a very early experience in boarding school in England, Camila felt moved to work with young people who were or seemed unloved. I was surprised and inspired that at such an early age she knew what she wanted to do and be. She did theatre and puppetry at university because she realised that “children would share with puppets what they would not share with an adult”.

Camila’s dedication, to these as yet unknown children, was so sincere that she decided she could not have her own children if she wanted to take on this role. With some humour she announced this to her friends so that they would know not to try to fix her up or distract her with their dating stories. She has no regrets and there is so much more she wants to get done so the challenge continues.

Who are the young people?

It is not always mentioned that Camila is a trained psychotherapist. With my experience of counselling teenagers I am inspired by the transformation she achieves with these young people. In some ways the reasons why they come to Camila’s attention are not new but there seems to be little in the present system that is geared to improving their life chances. Kids Company is a wraparound service and it is what these kids need otherwise they fall through the various organisations tasked with helping them. At Kids Company someone will really get to know all about their world and their experiences to date to be able to provide good mentoring and effect change.

These young people are likely to have experienced:

Much of what Kids Company does is intensive and reparative, and works alongside mentoring and in-school programs. With the support of the workers many of the young people go on to take up good training, university and employment opportunities.

What is incredible is that the conditions that give rise to this has not changed for decades but yet very little seems aimed at addressing those young people with these experiences. Camila continues to fundraise to do her work and without it such work will not be done. Kids Company has branches in many parts of the country, the most recent addition being Bristol. I found out that there had been some interest from Berkshire when Camila addressed a Head Teachers’ conference a couple years ago. It would be interesting to see if there is demand and support for this in the Thames Valley.

As well as working with the educational establishments Kids Company works with social services, mental health, the NHS and young offending teams to help sort out the chaos that exists in many of these kids’ lives. They have an initial battle to get the children to trust them, as these young people have already been failed by the adults their know. Before Kids Company can really begin working with a child they must ensure that she is safe at home. Only then can they begin deeper work with the child and support them in reclaiming their childhood rather than the tough exterior they have developed for self-protection. This is delicate, expert work that if not well-resourced or badly done can do more harm than good.

What effect does such early experiences have on these young people?

Camila quotes a study published by the London School of Economics last September. This analysed the work of Kids Company and explored its interventions. The report identified that a significant portion of Kids Company’s clients had witnessed or experienced violence of a traumatic nature such as stabbings and shootings! Others had been threatened or robbed and they considered the journey to and from school to be dangerous. Such trauma and violence may then affect their mental health. Camila shared that many of the young people she comes across believe they are soldiers fighting for survival in our cities. Part of the work is to begin to undo the negative impact all these early experiences have had on the young person’s brain development.

Looking after her staff

The staff can access psychotherapy, counselling and alternative therapies to help them take care of themselves. The work is challenging and could be draining so it is great for them to feel nurtured and valued.

I found the offices so attractive and all the staff so knowledgeable on what they were doing that they almost had to throw me out. The offices are colourful and expressive with graffiti like art in the corridors and dramatic installations on the ground floor. There was also a fantastic exhibit where the young people depicted their lives before and after their engagement with Kids Company. The kids were very honest and portrayed moving scenes of sleeping rough in parks and laundrettes; being hungry; sleeping on the floor; hanging out in pubs for hours on end and living in very cramped conditions. One of the kids depicted a scene where she was out in the cold before being rescued by Camila as if caught in a (safety) net. This was all part of Kids Company’s shoebox campaign involving 125 school children.

Last year they produced an art exhibition in partnership with the Royal Academy that was described as “incredible” by Damien Hirst and given a five-star rating by the Daily Telegraph. Through art, poetry, fashion and gardening young people are given the opportunity to find their passions and take these to the next level.

What’s next for Camila and Kids Company?

Camila and the team continue to have big plans for Kids Company as they see a great need for its services. The aim is to raise more funds to expand the nature of the work: more clients in more locations.

Kids Company works with many different companies and individuals to achieve its goals. There is a recent collaboration with the London Evening Standard where they are funding an initiative to help former gang members set up social enterprises.

The charity has created a professional development certificate in therapeutic communication skills for work with children. This has been developed in collaboration with The London Metropolitan University and serves to increase the supply of people skilled in this work.

Kids Company is supporting former clients to come together and make a difference in the way vulnerable children are dealt with. The group, known as Urban Wisdom, has already found themselves working with the children’s commissioner on gangs. It is hoped that their experience will make them credible with those setting policy.

Recently the artist Damien Hirst auctioned one of his Mickey Mouse paintings (drawn as one of his iconic spot paintings) and gave the proceeds to Kids Company.

Looking after body and soul

Camila speaks of having a childlike way about her where she is fully engaged in something but then able to leave it a moment later. Her ability to switch off easily helps her to make good use off her downtime. When she is not working she is able to relax easily. This is a perfect fit for this type of work and allows her to use her off time to replenish herself rather than worrying about her clients. She also “loves swimming and can do that for hours”. Swimming is very calming. I suspect she has some spiritual practice or faith but I am not able to confirm this. Her creativity with fabric and design would also be re-energising.

Her dyslexia means that she does not lose hours on the Internet. If it is not printed she cannot and does not read it. Think of all the hours saved not being online. Camila has long days, and often gets to bed at 1am. Her long days often end with the necessary fundraising events and she does this very well. Her main purpose though is not fundraising but doing the valuable work that she is passionate about. Yes she is a psychotherapist, an author and a philanthropist but most importantly I think she’ll say she is a Children’s Advocate.